Russell is a senior in the College, Front Row’s beloved co-social chair, manager at WilCaf, and more things than honestly even he can keep track of! He’s also an ensemble actor in FTC’s upcoming production of “Cabaret”! 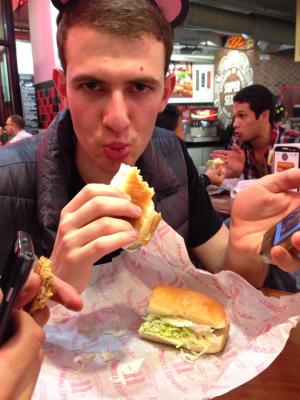 FTC: Who are you in the show?
RA: I play Bobby, part of the Kit Kat Club.

FTC: What’s your favorite musical number so far and why?
RA: Though I’m not part of it, I cannot WAIT for the Emcee’s number If You Could See Her. Sharell and Logan are gonna KILL IT.

FTC: If there was a drink named after you at WilCaf what would it be called/consist of?
RA: It’d be the Razzle, or a Cinnamon Dirty Chai. It’d be spicy. It’d be caffeinated. And it’s got a cute ass name.

FTC: How many FTC shows have you worked on?
RA: I would say over 10 at this point, but my favorites have been the 25th Annual Putnam County Spelling Bee, and The Children’s Hour.

FTC: If there was a Buzzfeed article written about you 20 years from now what would the title be?
RA: 20 GIFs the Prove that Russell Abdo is still as SWUG as Ever.

FTC: What is the funniest thing that has happened in rehearsals so far?
RA: Watching Ashley Catalano try to square dance. You think white people would be better at it.

Come see Russell and the rest of Front Row in “Cabaret” this February 20th, 21st, and 22nd!