Zach Baldwin is a junior in the College doing costume design for FTC’s upcoming production of “Cabaret”! 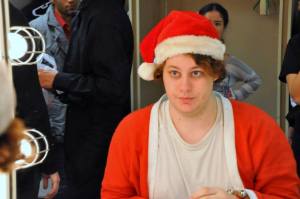 FTC: What are the responsibilities of the costume designer?
ZB: In short: I’m responsible for making sure that the cast are all appropriately (or not so appropriately) dressed for the show.

FTC: What’s your favorite part about being a costume designer?
ZB: This one’s hard! Um…I guess I’d have to say actually being finished so that you can finally see everything come together all at once.

FTC: If there was a crayon named after you what would it be called?
ZB: Perfectly Mauve-lous.

FTC: How many FTC shows have you worked on?
ZB: Oh god, so many. King Lear, Zanna Don’t, Proof, God of Carnage, The Children’s Hour, Lion in Winter, and now Cabaret!

FTC: What was the one Disney character you always wanted to meet as a child?
ZB: Pretty much anyone from either The Little Mermaid or Winnie the Pooh.

FTC: What is the most unique costume piece in Cabaret?
ZB: Well there’s a gorilla costume in the show, so it’s hard to compete with that…