Chris Burcheri, a senior in the College and Front Row’s illustrious chair, is the Music Director for our upcoming production of “Cabaret”!

FTC: What is your favorite musical key and why?
CB: This is such a hard question to answer! It depends on the style and the performers; in musical theatre, A major/minor tend to work well because they sit comfortably in many singers’ voices. But if you’re writing for a group of brass instruments, for example, E-flat major is where it’s at.

FTC: How many FTC shows have you worked on?
CB: Cabaret is, incredibly, my 13th FTC show, and I’ll be adding number 14 this spring with Rabbit Hole.

FTC: What is the best Halloween costume you ever wore?
CB: I grew up a few blocks from the at-the-time general manager of the New York Islanders NHL team. When the NHL players went on strike in 2004, I dressed up as a striking hockey player and trick-or-treated at his house. It was, at least, the most topical Halloween costume I ever wore. That counts, right?

FTC: What is the most challenging song in Cabaret?
CB: Every song in this show is challenging! I know it’s a cliche, but cliches exist for a reason. Even if the notes are easy to learn, you can’t just sing them and call it a day. There are always more ways to explore all of these songs, emotionally or otherwise, which is part of what makes Cabaret one of the best musicals of all-time.

Jeremy Cohen is a freshman in the College trying his hand at dramaturgy! 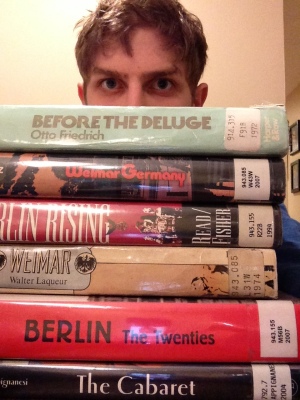 FTC: What is a dramaturg?
JC: Basically, a dramaturg is one whose studies include theatrical history and the historical context of and within specific plays. The work is, by nature, nested in the belief that artistic representations can speak to real human experiences.

FTC: What inspired you to interview for the position of dramaturg?
JC: One night, as I lay in slumber, the Deity came to me and spoke thus: “Jeremy, my son. Thou hast always enjoyed historical and cultural study, especially of early 20th century Weimar Germany and its greater European milieu. Dramaturgy is a decidedly different and interesting way to contribute to the theatrical production without a regimented time commitment. Thus, as I am your Vague and Nondenominational Lord, take thy staff and walk before the people, and they shall know what thou art.”

FTC: What is the best commercial you’ve ever seen?
JC: Old El Paso Hard & Soft Tacos. “¿Porque no los dos?” is a terrific life philosophy. I have never actually tried the product, however.

FTC: How many FTC shows have you worked on?
JC: This is the first, hopefully of many.

FTC: If you could have the largest collection of anything in the world what would you collect?
JC: One-of-a-kind items. That seems properly paradoxical.

FTC: What is the most interesting thing you’ve learned so far about Cabaret?
JC: Anyone who has taken a cursory look at European history knows that the two decades between the World Wars (1919-1939) was full of peril, instability, political turmoil and economic hardship. That said, it was also an era of unprecedented artistic merit and productivity. Nowhere was this more true than in the doomed German republic. In the kabaretts of Berlin, one could find intimate escape, but also a dark, comedic venue for the very serious social and political chaos of the day.

Come see Chris and Jeremy and the rest of Front Row put on “Cabaret” this February 20th, 21st, and 22nd!